Oren Smadja was Israel’s first male medalist at the 1992 Olympic Games in Barcelona and the only Israeli Olympian to date who has won a medal as both as a sportsman and as a coach (with Ori Sasson, Rio 2016). 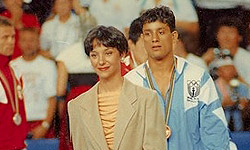 Oren Smadja was born on June 20, 1970 and grew up in Ofakim. His father Maurice Smadja was a judo coach and one of the founders of the sport of Judo in Israel.

At the age of 12, Smadja participated in his first ever Israel Judo Championships and won a gold medal. He began international competition when he was 17 years old and joined the Israel National Team under the guidance of Moshe Ponti.

Smadja earned the right to participate in the -71 kg category at the 1992 Olympic Games when he won the silver medal at the Open Championships in the Czech Republic.

At the Olympic Games, Smadja captured a bronze medal after defeating a number of opponents by Ippon and not only became the first male Israeli sportsman to win a medal, but also one of the youngest ever to win a medal in Judo at the Games thanks to winning five matches in a record time of 5 minutes and 45 seconds (a single judo match is 5 minutes).

In 1995, three years after the Olympic medal, Smadja won the silver medal at the World Championships that took place in Chiba, Japan under the tutelage of his father Maurice Smadja and Moshe Ponti.

Smadja was named the 1995 Sportsman of the Year and was named coach of the year in Israeli sports on both 2015 and 2016.

After retiring from active competition in 2010, he was selected to coach Israel’s Judo teams and is now responsible for Judo’s renewed success internationally. He was Ori Sasson’s coach when he won the 2016 bronze medal at Rio as well a Sagi Muki’s coach who finished in 5th place. Smadja has trained Judokas who have won World Championships, European Championships and other renowned tournaments.